Family owned and operated to this day by the Scott family, the story of one of the last remaining Catskills resorts began in 1869, when James Scott and his wife began hosting seasonal lodgers in their farmhouse alongside Oquaga Lake. During the first decade of the 20th century the now famous Playhouse was built, with its wide porches the perfect location for guests to socialize while enjoying a view of the lake. Originally called the Casino, the building also became a focal point not for gambling, but for entertainment. Bowling alleys, a marble topped soda fountain and dance floor were a highlight, with a ballroom, stage and lakeside pub added later. And all can be enjoyed today during your visit. Sadly the original farmhouse burned down on Christmas eve of 1921, but the family was determined to rebuild and just few short months later they reopened for the spring 1922 season. Luckily for us, that iconic Playhouse remained unscathed, and continues to be the center of life at the resort to this current day. Throughout the years, generations of visitors have made Scott’s their summertime destination, savoring the beauty of the tree lined landscape and old fashioned pleasures such as swimming, boating, tennis, golf and shuffleboard. Generations of the Scott family too have been there as well, and are still running the place, welcoming returning guests like old friends, and making new friends of new guests – like us! While not as many rooms are available as once were during the heyday of the Catskills resorts, the 2 story Guest House across from the Playhouse has individual rooms available and the lakeside “cottages” are a great way for families or larger groups to all stay under one roof. The accommodations are simple but sufficient, especially for such little time you’ll spend in your room – there’s so much to do elsewhere! The Scotts look forward to updating guest rooms in the future, and Mod Betty sees a great opportunity here for history-minded decorators or collectors looking to display their creative flair. There is such potential for this entire property, the one way that we can help is to stay here, even if the pillows may not match the bedspread or the bathroom fixtures are 1970s Harvest Gold.

The real charm of a stay at Scott’s isn’t in the guestrooms, anyway, but in the feeling of being a part of history – vacationing as they did in an earlier era. Sitting on a rocking chair on the porch feeling the lakeside breeze as you watch folks paddle in the lake, or canoe on by. Lounging under a fragrant lilac bush and reading a good book. Bowling on old fashioned lanes where the pins are set by hand, or eating an ice cream at the antique marble topped soda fountain. Playing ping pong or listening to a live band in the ballroom, or maybe singing along on the party boat. 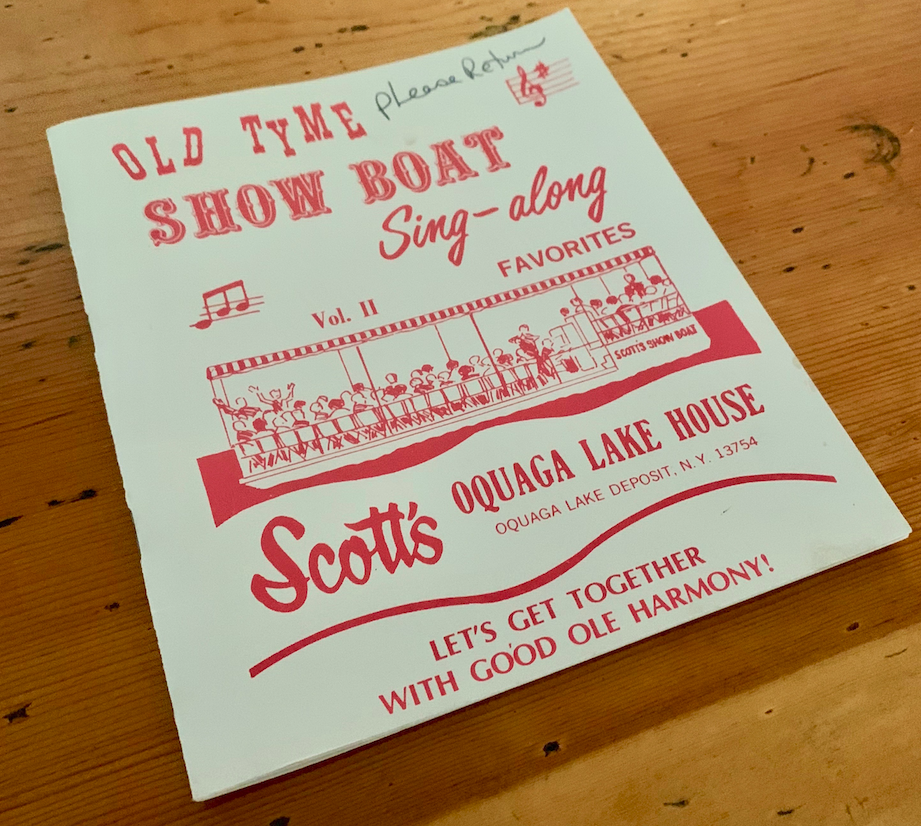 With the renewed interest in Scott’s because of the filming of the Marvelous Mrs. Maisel Amazon TV show I am crossing my fingers  that people who want that stepped back in time feeling will flock to Scott’s, and bring a new era of life to this charming old place!