Hey kids, wanna go walk across a bridge, look at some holes in a rock and buy something at the drug store? You can do all that in Shelburne Falls, MA but trust me, it's a lot cooler than it sounds!

I've had the Bridge of Flowers on my list of places to check out for years, and when we finally made it there one sunny day a few weeks back it did not disappoint. This charming hand made slate sign sums up the allure:

A 400 foot 5 arch span, was originally a trolley railway. When abandoned in 1929 it was converted into a pathway of flowers. 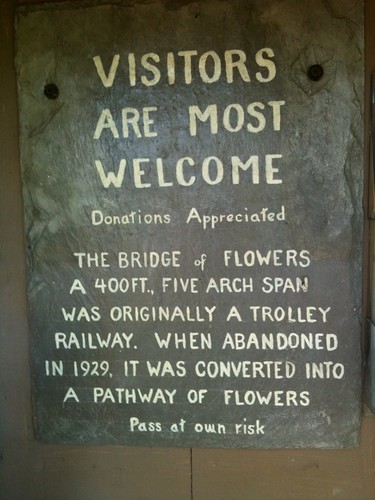 I'm not sure the Retro Roadkids were as charmed as Roadsis and I were, but who cannot like smelling pretty flowers on a warm sunny day?

Just "bee" careful or you might get a poke in the nose!

They even have benches for sitting in the shade of the trees that have grown on the bridge through the years. Set a spell, look at the water with the sunlight dancing upon it, surrounded by flowers? Swoon! 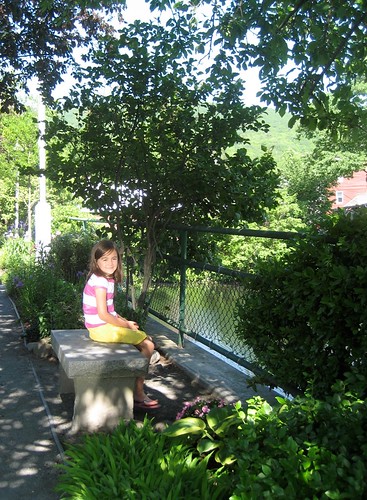 Once we crossed the river into town we didn't quite know what to expect, but the outside of the Baker Pharmacy looked promising, with it's cheery striped awning and vintage painted advertisements. We were later to learn that it is one of the oldest drug stores in Western MA.

The inside was a totally unexpected find, with an original soda fountain in the front (remodeled in the 1950's), vintage prescription counter in the back and "penny" candy for the kiddies.

While the Bridge of Flowers was the main reason we came into town, we saw signs for the Ancient Glacial Potholes over on the other side of the street, so we moseyed over to see what those were all about. Who knew Mass was famous for their potholes for so long- talk about Retro! ;-)

Potholes were ground out of granite during high water of the glacial age by whirlpool action of water and gyrating stones of varied sizes. Some of the grinding millstones may still be seen in the smaller potholes.

Over 50 such potholes exist in this confined area know in Indian Days as "Salmon Falls".

These Potholes vary in size from 6 inches to 39 feet in diameter, the latter being the worlds largest pothole of record.

We also read that up until a few years ago you were able to swim and sun at the Falls, which must've been great fun.

There were little mom and pop shops to poke around in and a number of places to grab a bite to eat, or  a sweet treat. If you're in the area and want to get off the beaten path, enjoy the small town charm, natural and man-made wonders of Shelburne Falls, MA!