One of our fave Retro Roadmap Reporters from Vermont Craig Fitzgerald (in real life, Editor of Hemmings Sports & Exotic Car and a RetroRoadmap fan) was swell enough to pass along info about Lost Highway Art– a company that specializes in vintage travel decals. My adrenaline went through the roof when I saw this, as I too am a collector of these fabulous graphics (as assembled below, along with a great book about ’em – Coast to Coast- The Best of Travel Decal Art). 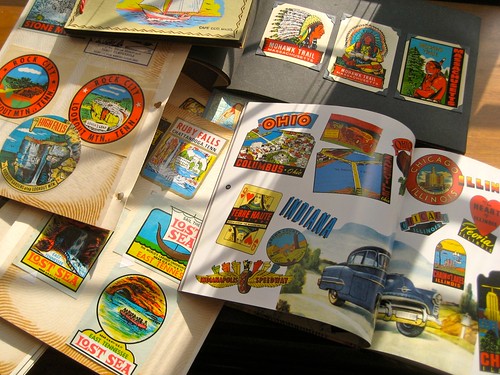 Not only did our pal from VT send us the link but he also did the best thing ever by writing about them AND including some pictures as seen below. Thanks so much for the mid-week vintage find, CF, a special Retro Roadmap thank you will be winging it’s way toward you soon!

Vintage Travel Art on the Cheap
By Craig Fitzgerald
In the post-war, golden age of travel, most folks couldn’t afford an airline ticket and instead traveled by car, with a 13-foot Serro Scotty hitched to the bumper of their ’62 Biscayne. When they stopped in a rest area for a Moxie and a hot dog, they’d buy a decal depicting the state they were passing through.

These vintage travel decals are the specialty of Dick Schneider of Bedford Hills, New York, who runs the Lost Highway Art Company. Schneider has been collecting these water transfer decals for years, and has amassed a collection of over 10,000 from all over the country. Schneider sells thousands of decals through his mail order business and at various swap meets in the Northeast. Most of the decals are in the $5 range.

The company’s website offers more than 350 decals from every state in America, all in their original packaging. Thanks to their reasonable price, you can use them as they were intended. Some of Lost Highway Art Company’s customers purchase two identical decals so that they can apply one to the window of their vintage car, and preserve one in a photo album.

Some decals feature a single cartoon image representing the particular city or state. One decal from Las Vegas features the iconic cowboy from Fremont Street, with a hand-rolled coffin nail in his teeth, a thumb jauntily stuck in the air, and a booming “Howdy, Podner!”

My favorites, though, are the ones that depict cartoon versions of entire states, with not-so-subtle — sometimes downright embarrasing — reminders of what that state is famous for. As you can see from the accompanying art, Vermont has a perplexing problem with polar bears. And as you may well know, Massachusetts is populated entirely by fun-loving pilgrims.

(Mod Betty adds – I swear I have one for Connecticut that says it’s the Insurance State – makes my hometown Puritans quite the party animals by contrast!)

Thanks Craig, and here’s a ‘nother little something from my collection that I found on a neighbor’s trash heap. Not sure what I’m gonna do with it yet, but it was too cool to leave it there! 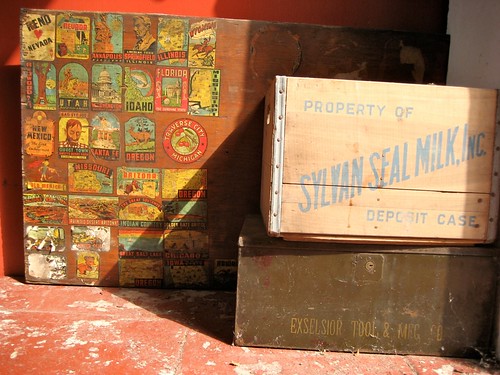