I recently revisited Sine’s 5 & 10 in Quakertown PA, one of my key Retro Roadmap finds since I moved to Pennsylvania. Good news is that it is still there, bad news is that it was closed because it was a Sunday. Because this place is so totally worthy of inclusion in the website (sez me!) below is a blog post I wrote when I first discovered this bright red gem back in 2007. I’ve tried to become more succinct in my writing since then, but I think the chat before gives you an idea of how you, too can randomly discover something you didn’t even know existed, merely by going right instead of left! 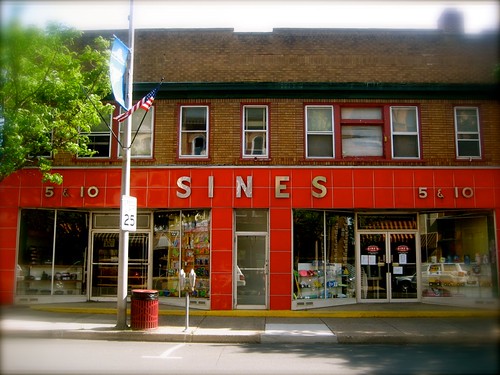 September 2007- After a very unfruitful day of thrifting (which is maybe a good thing considering all the stuff in my basement) I was headed towards home from Bethlehem PA. As I tried to make my way off 309, I noticed a small sign with gold lettering that read “Downtown Quakertown” with an arrow pointing in the direction opposite from where I was headed. Well, with the husband and the dog out of town, I technically did not have to be home anytime soon, so instead of filing it away on my “things to check out later” list, I turned left and headed towards Qtown.

Within a moment of crossing the highway I crossed Main Street, with a restaurant to my right, so I turned down Main, thinking this was my destination. Well there was nothing here BUT that restaurant, so I thought perhaps there was some false advertising going on regarding their notion of what a downtown was. Being somewhat tired from my day, I said, well that must be it, and tried to take a left onto the road that I came off of, to head back home.

As we all know, sometimes it seems like forever when you are waiting to take a left hand turn off of a side street onto a main road, so as I was looking left-right-left-right-left I noticed that I was on a numbered street, and the numbers got lower to the right. “hmmm,” I thought to myself, “I assume there must be a 1st street, and they wouldn’t just start numbering the streets at any random place would they? so maybe if I go right I will see where the numbers begin, maybe there is something interesting there.” Wrestling with the notion that my logic is not always accurate in that respect, the angel (go for it!) and devil (that’s a dumb idea) duked it out above my shoulders. Finally since it was easier to take a right into the traffic, right I went.

Within a few blocks I did come across the actual Downtown Quakertown, and was pleasantly surprised to see some old stores, some new stores, and some evidence of revitalization going on.

As a roadside fan, I easily spotted the bright red tiles and brushed aluminum letters of Sine’s 5 &10 cent store, but I didn’t want to get my hopes up that the place still existed in it’s original form. 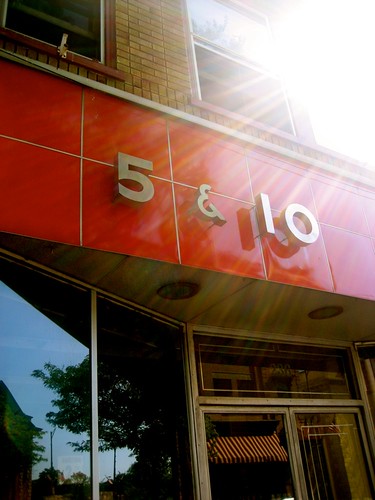 When I saw the sign that said that lunch was being served at the lunch counter until 2pm, my pulse quickened. The doors were wide open and I could see the place was up and running so I pulled my car into the next available parking space and with trepidation approached the building. 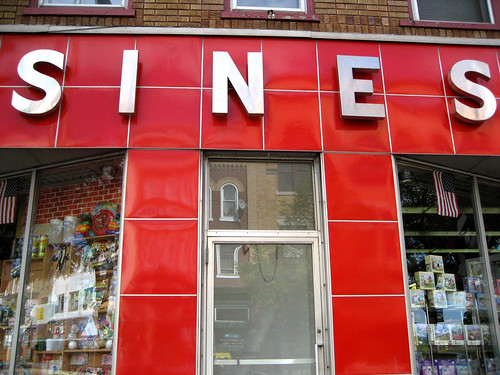 Sure enough it was an actual store with a long lunch counter running along the right hand wall. A young mother and her 2 daughters were ordering ice cream and an older woman was sitting in at the cashiers booth, and I had the feeling that I had stepped back in time 50-60 years. Oh BOY! 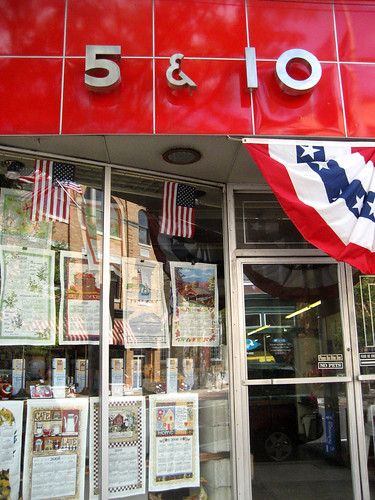 The place is huge, with all sorts of random things that made 5 and 10s so great- -tricyles, styrofoam balls, felt, dowels, hardware, candies, measuring cups, house numbers, you name it. There is another room off to the side with notions and yarn, and a back room that has holiday decorations in it. 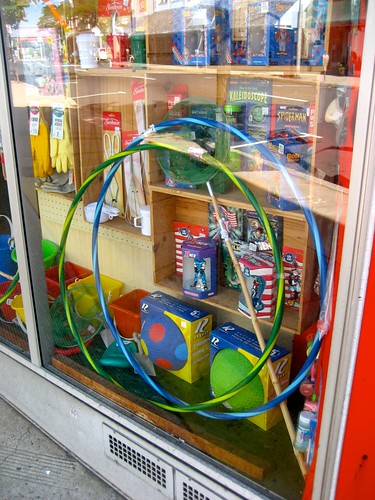 There are also tons of vintage items displayed from the 95 years of the place being open, as well as collections of model airplanes hanging from the ceiling, a giant blimp (!!) and tracks where model trains run during the Christmas season.

I was totally blown away with this place and walked around as if I were in a dream. When I came across a bearded gent creating a display with framed black and white photos of Quakertown High graduating classes from the early 20th Century, I had to just let him know that his store was the coolest place I had seen in a long time, and discovering it really made my day. He thanked me and gave me his business card, and then proceeded to bring me to the front counter and give me some typed handouts describing the history of the store and the lunch counter etc.

I was too overwhelmed by it all to ask if I could take photos, and all I could think of to buy was some yarn, but I definitely will be back more to shop and to order something from the lunch counter.

Until I can get back there to do some of my own photos, check out this Flickr search for more great photos of Sine’s.

Thanks to Lushie Peach for some of the great photos in that Flickr search, and for the link to this 2007 video about Sine’s: