UPDATE 2012 – Irving is celebrating his 97th birthday with an autobiography written with help from our very own Retro Roadmap pal Tony Sachs! Click here to get your very own copy of “The Pianos I Have Known”

Still saddened by the loss of Les Paul earlier today, I wanted to quickly remind the Retro Roadmap community about another 94 year old who is still performing music 6 nights a week in New York City. I’m talking about none other than pianist/songwriter Irving Fields who we had the pleasure of listening to and meeting with on my birthday last Friday.

Trained in the prime years of Tin Pan Alley and immersed in the classic American popular music of the pre-World War II era, IRVING FIELDS is simply one of the last of a truly special generation who continues to perform to this day.

And indeed this is true! Every night but Mondays you can find him behind the piano at Nino’s Tuscany, as we did. We arrived early on a Friday (since the Retro Roadhusband actually had a gig of his own later that evening) to find Irving getting the star treatment with a photoshoot for an article for NYCgo Magazine which you can read here. 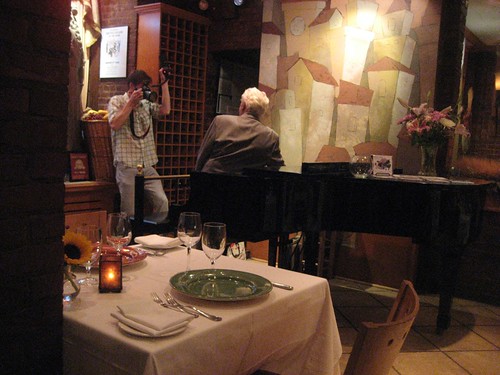 (Side note: as you have probably noticed if you’ve read some of the posts here on Retro Roadmap, I don’t tend to take photos with people in them, and this stems from the fact that I personally don’t like to be in front of the camera. However some of the photos of Irving from our visit have me in them, so it’s a rare appearance I make here on my own website!)

Since it was so early we were lucky enough to have him practically to ourselves, so we sat at the bar, ordered a classic cocktail and became enraptured with his take on the American Songbook Standards that I love so much. 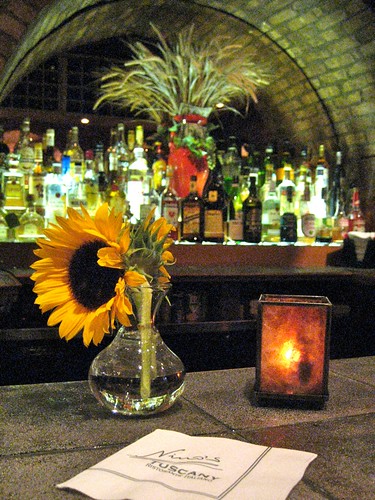 During the first break he came over to greet us, and my husband was kind enough to drop the hint that it was my birthday. Well Irving could not have been more delightful! He perked right up and said, ” I’m going to write a song for you on your birthday!” While I was charmed by the offer, I told him that was not necessary, but if he knew any Cole Porter I’d be happy just to hear that.

He returned to his piano, took out his fountain pen and began to jot some notes down. We then got chatting with the photographer from the shoot (Malcolm Brown) and I was delighted to hear some of my very favorite Porter tunes coming from Irving. I raised my glass to him in thanks and he gave me a winning smile.
Soon after he came over, paper in hand and SANG THE SONG HE WROTE FOR ME, TO ME!!! I was so touched. 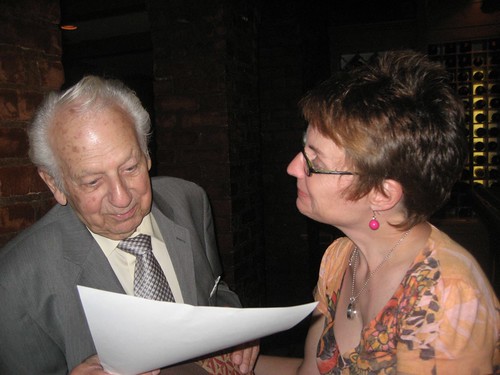 He then gave me the lyrics to keep, and walking home I felt like Zuzu in It’s a Wonderful Life, protecting my precious gift with my life. 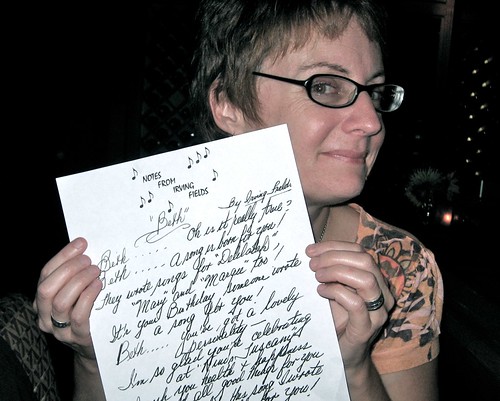 I was ready to spend the rest of the evening there, but we had to head downtown to meet friends at the gig. We promised Irving we’d be back soon and bring friends- won’t you come along with us the next time we visit? 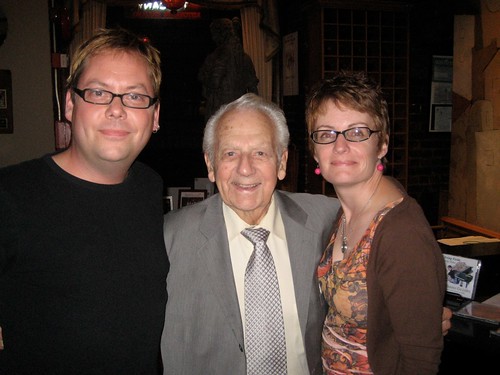