January 2018 update: Still closed, here are 2 articles about the “progress”

February 2017 Update: CLOSING/CONDO CONVERSION – Sad to learn through Jeremiah’s Vanishing New York that the Waldorf will be closing in a few days for renovations turning this once accessible to all grand hotel into condos. While there may still be rooms to rent there, the jury is out as to how welcoming the public spaces will be, now that it won’t be a truly public space. At least I have my memories from 2010 of us popping in for a nightcap! I’ll keep everyone posted on the future of the WA.

On the way from Mass to Penna over the holidays Retro Roadhusband and I were heading to an off Broadway show until traffic literally put a halt to those plans. We were already practically IN New York City, and couldn’t turn around if we tried, so we decided to make the best of it. After insane traffic, aggravating parking and the stress and disappointment of missing the show, this is where we ended up: 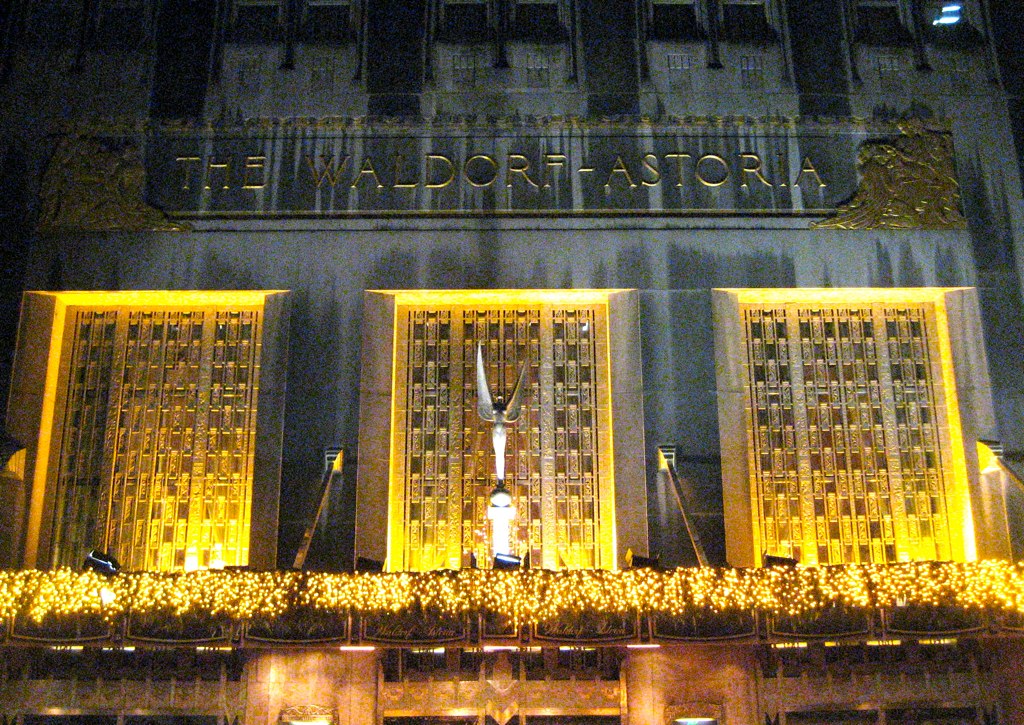 No, we couldn’t stay there, but check the place out and perhaps belly up to an elegant bar? Yep, few things turns my frown upside down better than a classic cocktail at a classic haunt.

This location of The Waldorf was built in 1931, when the original hotel had to make way for something called The Empire State Building. It is a grand place, with an art deco exterior and  old fashioned opulence that just told me we had to go in and get one teeny tipple, even though the price might be dear. And oh dear was it! But as a probably once in a lifetime indulgence, it fits nicely into the patchwork quilt of stories I can tell the Retro Roadkids when I’m a great aunt.“Oh yes, and there was that time we just popped into the big city for a quick nip at the Waldorf….”

We strode purposefully into the lobby as if we belonged, but we needn’t have worried that we would stick out as the place was absolutely mobbed with what seemed to be mostly foreign tourists. The place was still aglow from the holidays (weren’t we all?) and we marveled at the beautiful mosaic floor under our feet. 2017 update = here’s a post about this fab mosaic, from Ephemeral New York: 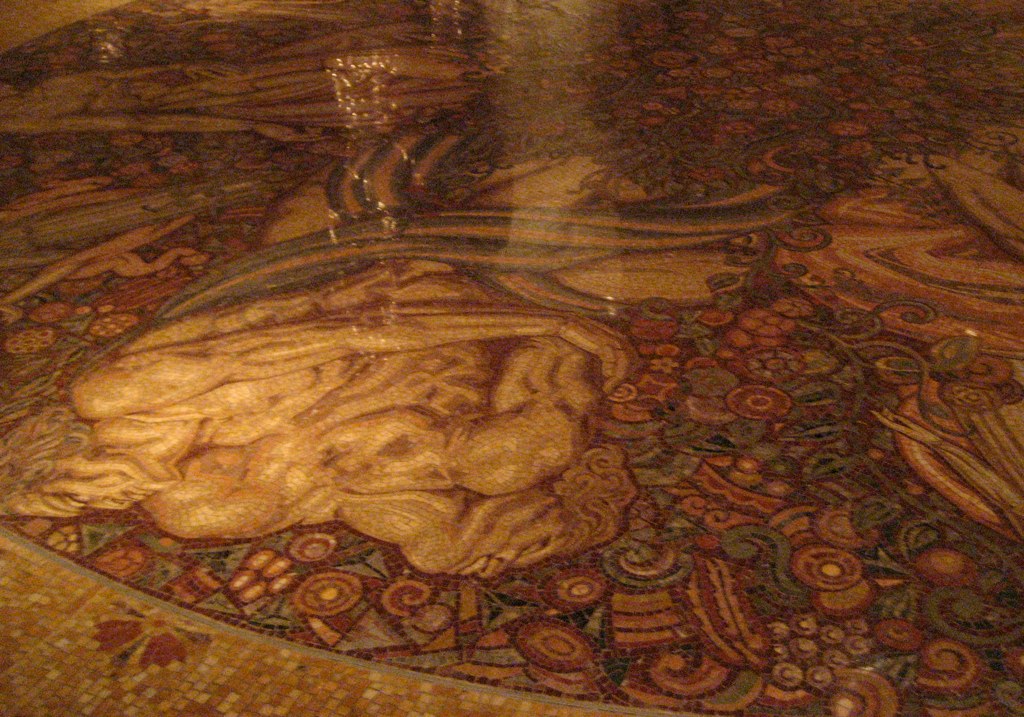 There is a Cocktail Terrace just off the Park avenue lobby, however I was hoping to prowl around some before we settled ourselves down. We made our way in and already I was admiring the deco reliefs on the elevator doors and the wonderfully evocative sign beckoning us to ring in the new year on the elegant Starlight Roof. 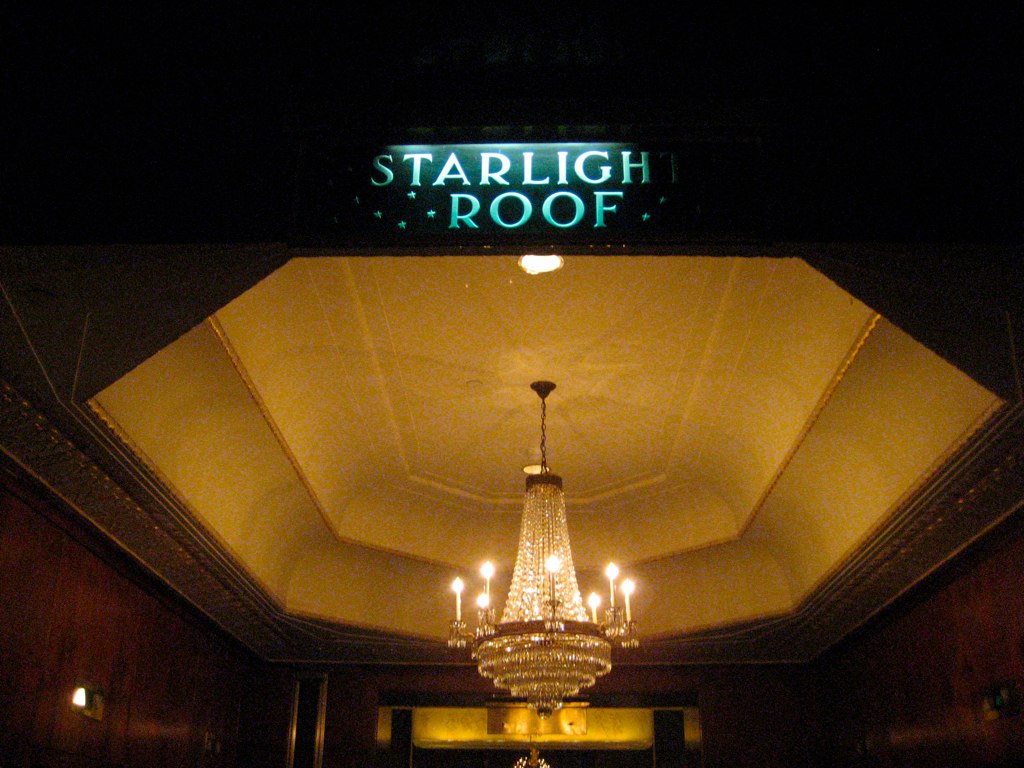 We walked past the too clubby Bull & Bear bar and finally settled in at the Peacock Alley. This bar’s name is an homage to the nickname given the lobby joining original Waldorf and Astoria hotels at the old locale, evoking the preening and strutting of ladies with be-feathered hats, in this place to see-and-be-seen. While we were by no means dolled up, we were able to order our classic cocktails and let the stress of the day slip away as we sipped. 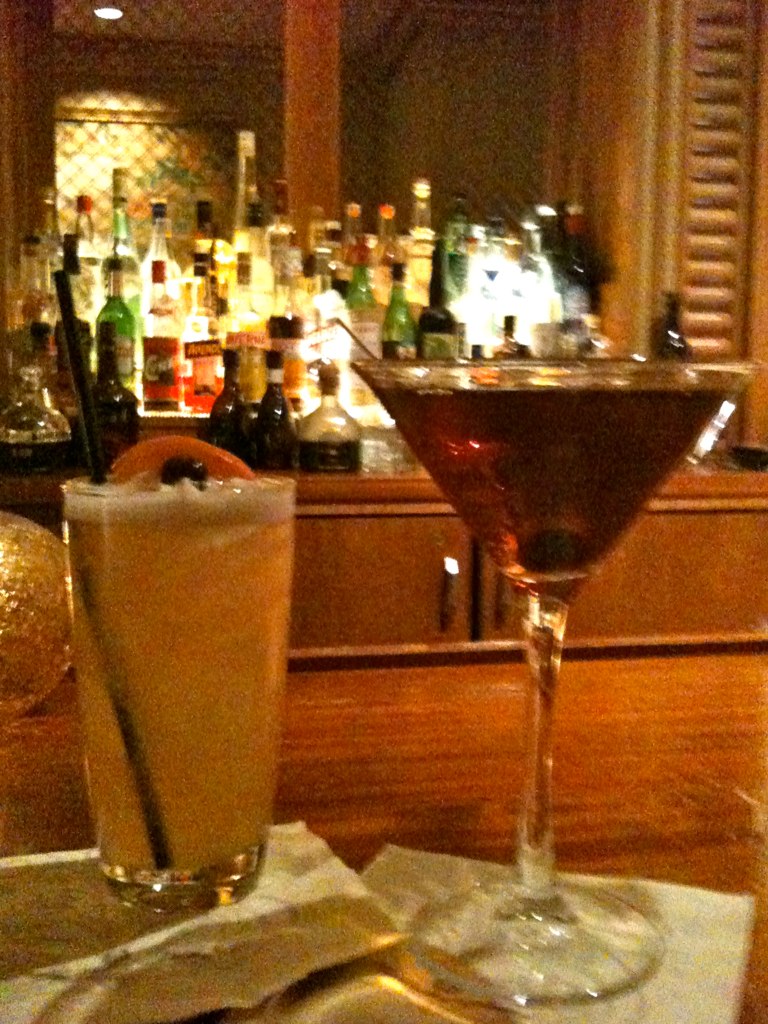 (I tried to look up on my iphone to see if there was a classic drink associated with the Waldorf, but wasn’t able to find anything before the barkeep approacheth. We were so close! I have since found out that the Rob Roy is rumored to have been invented here, so at least it was a very close brother to Retro Roadhusband’s Manhattan pictured above alongside my whiskey sour.)

Sitting at the 30 foot bar we had a perfect view of the comings and goings of guests -checking in and out, and meeting at the famous clock. 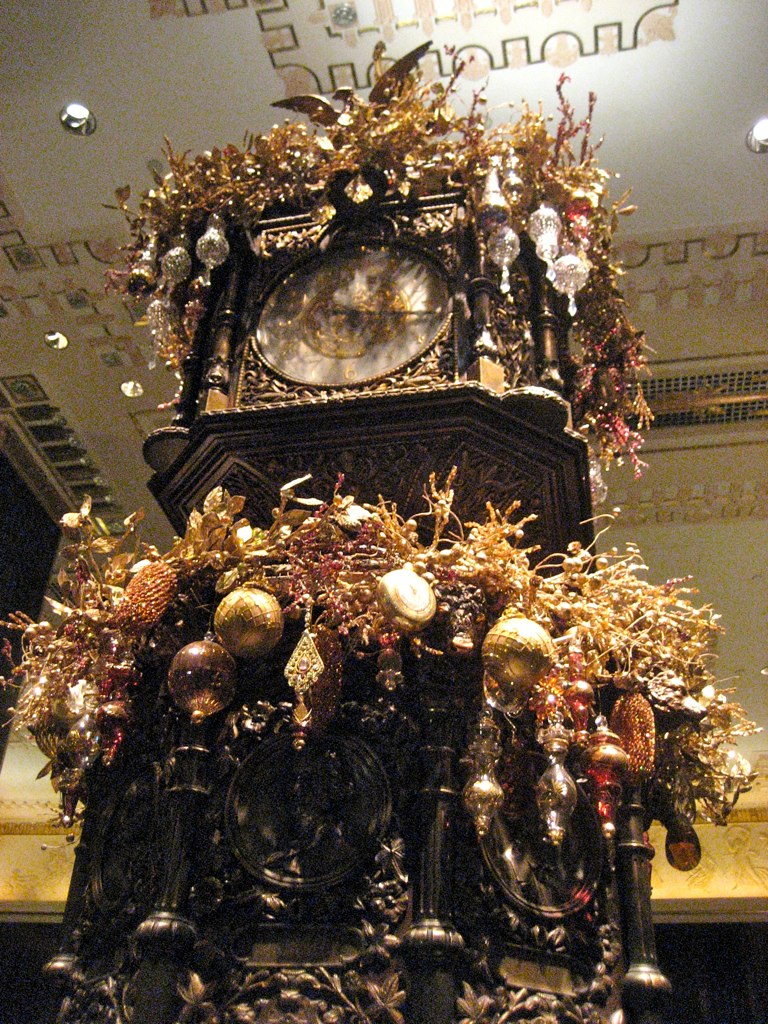 ( A bit gaudied up for the holidays, like many of the monied we saw meeting there!)

The Waldorf Astoria Clock was executed by the Goldsmith Company of London for exhibition at the Chicago World’s Fair in 1893. It was purchased by the Waldorf Astoria and was the focal point outside the Rose Room of the original hotel at Fifth Avenue and 34th Street. This clock weighs approximately two tons and stands nine feet tall. Around the eight sides of the base are likenesses of Cleveland, Harrison, Washington, Grant, Lincoln, Franklin, Jackson and Queen Victoria. Under these are bronze plaques depicting various sports and scenes. Westminster chimes ring on the quarter hour.

We nursed our drinks and when we heard the chimes on the elegant clock ring on the third quarter hour, like Cinderella, we knew it was time to leave. While I didn’t find out about the Rob Roy connection during our short visit, I did learn that my fave songwriter Cole Porter was in residence at the hotel from 1939-1964 and he often played the piano in the Cocktail Terrace, so I made sure to snap a photo of that. 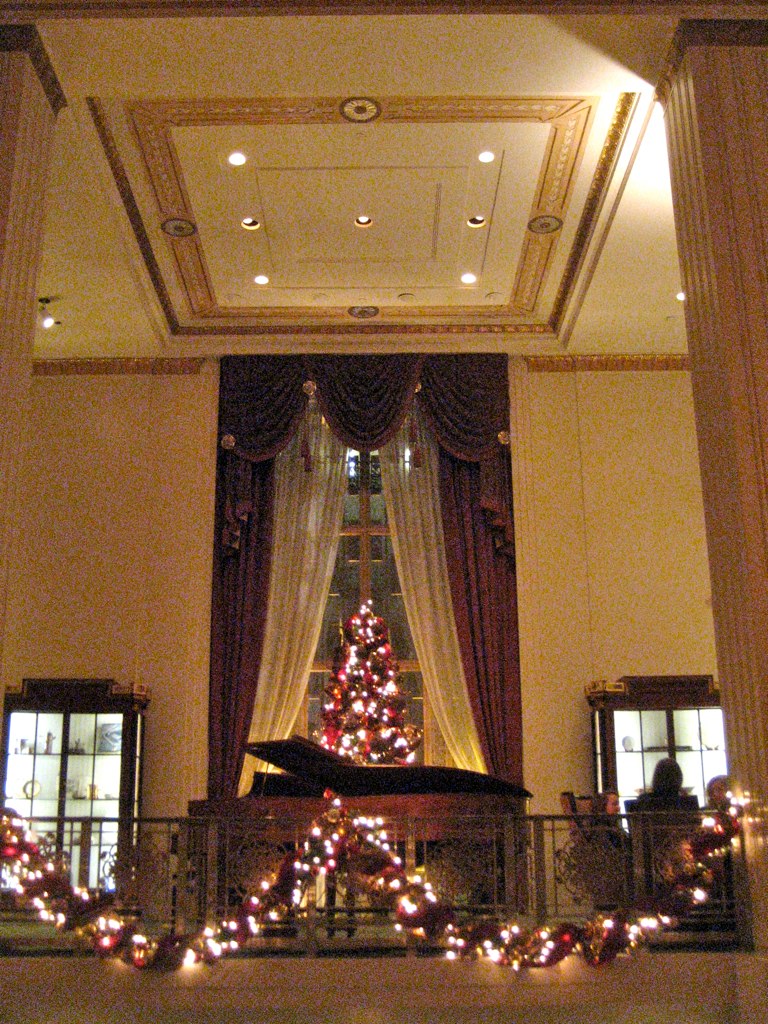 ( At words poetic I’m so pathetic that I always have found it best, instead of getting them off my chest, to let the rest, unexpressed…)

As a quick but hopefully amusing P.S. to this story, I wanted to visit “The Ladies'” before we left the hotel, and it was as elegant as the rest of the place. As I was tidying myself up I put my hands in my coat pocket and found a wad of fast food napkins I had stashed in there during a quick stop on the highway. Seeing the overly elegant towlettes (they were too luxe to call paper towels) I quickly trashed the fast food naps and folded a few of the “WA” monogrammed ones in my pocket. 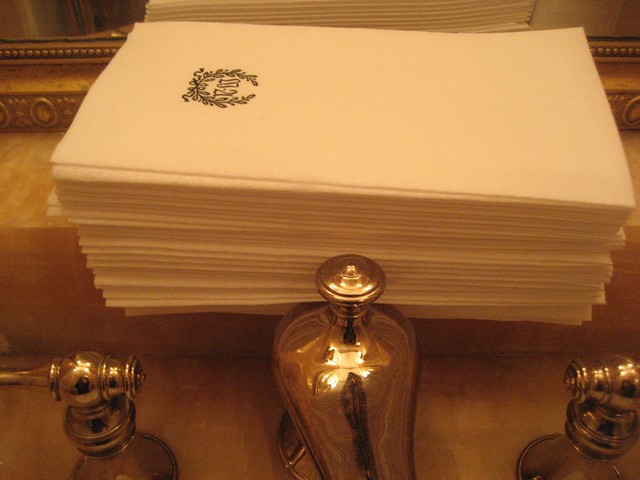 I thought, “If I should get hit by a taxi while crossing the street, when the paramedics go through my pockets, at least they will think I’m a swanky gal”!

PrevPreviousRetro RoadDog Approves Of The New Digs
NextMeet Me at the Hokey-Pokey Cart for A Horse’s Neck or Zaza Cocktail!Next