We may not know art, but we know what we like. And a gallery dedicated to the preservation and presentation of paintings on Black Velvet of everyone from Elvis to Liberace and even Donald Trump is something we like. A lot.

Welcome to Velveteria: The World’s Only Velvet Art Museum

Started in Portland, OR and now located in Downtown Los Angeles in historic Chinatown, this one of a kind attraction is a must visit for fans of Retro, Tiki and Kitch. Hell, part of the collection was once owned by a guy named Doctor Kitch (his real name.) 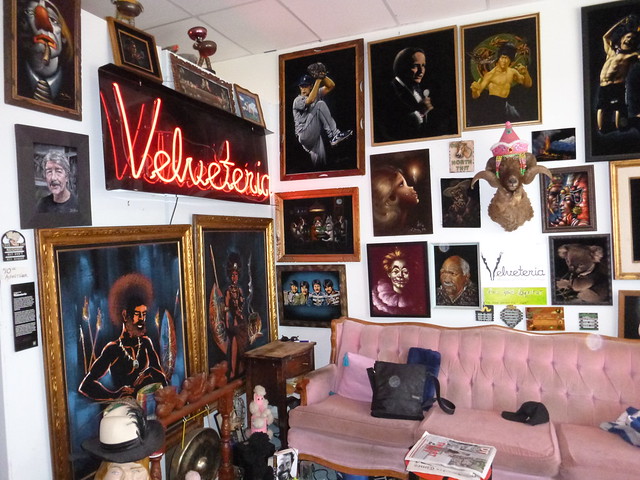 The massive ever-growing collection offers something for everyone – from the vintage 1930s island beauties created by Edgar Leetag to recent masterpieces of Caitlin Jenner. Co-owner/curator Carl Baldwin welcomed us in recently and gave us an exclusive behind the scenes tour and interview. 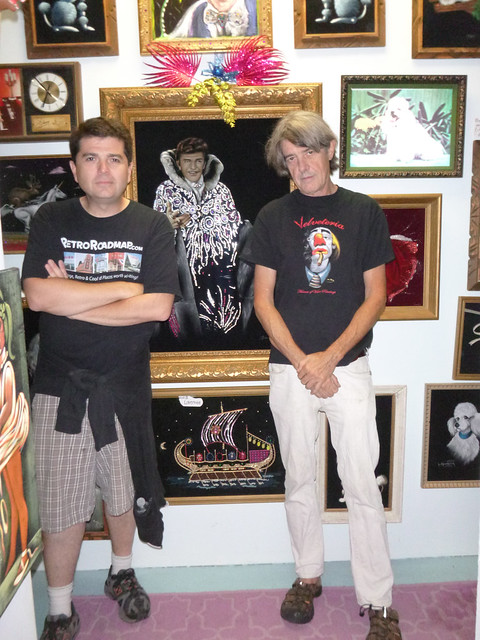 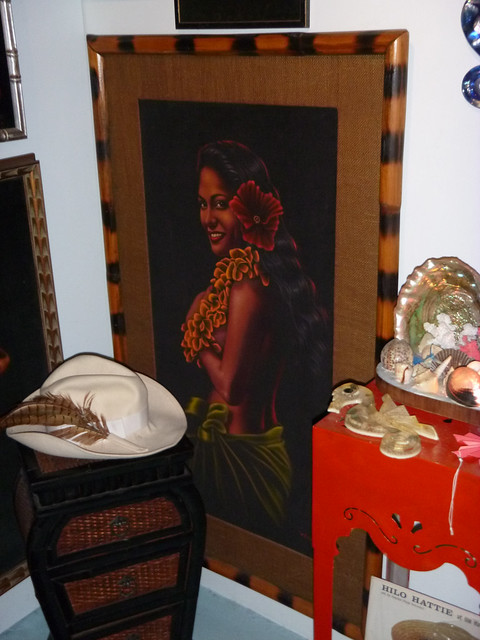 Q: What inspired you to open a Velveteria? A: Franky, I’ve had a lot of bad things happen in my life. But I don’t want to sit around and have a miserable life. I started finding these velvet paintings all over. We had thirty in our house and people started over-reacting to them. I saw a Brian Wilson concert and said, “If that son of a bitch can get out of the sandbox and finish that album I can do something.” Brian Wilson motivated me. Of all people.

Q:What was the first painting in your collection? A: In 1999 my wife and I were in Bisbee, Arizona messing around on the border. We went into this antique store, junk store was more like it. And we found JFK and a woman with a blue Afro. JFK was a hundred dollars and was full of holes. So we bought the woman for maybe thirty-eight dollars. That was the first step on the velvet trail.

Q:How many paintings do you own at this point? A:Almost four thousand I’d say.

Q:How many are here in Velveteria? A:I haven’t counted them. Just in this front room alone here there has got to be one hundred and fifty. There’s a lot. The walls are just covered. There are maybe around eight hundred in the back. 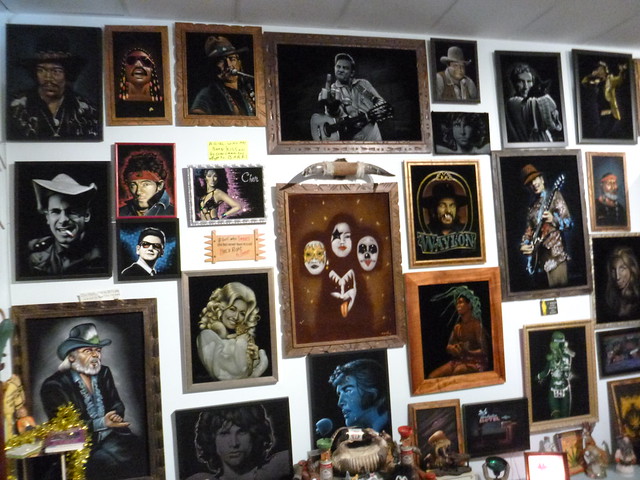 Q:Where do you keep the ones that aren’t on display? A:We have storage units all over creation. Scattered from “Hell to breakfast.” As the saying goes.

Q:What kind of care and upkeep do you need with velvet paintings? A: You want to keep them out of the sun as much as possible. A lot of them get fuzz of cat hair. All of them come with cat hair. (Laughs) The real cheap way is to get one of those lint rollers. Some of them are to too sticky and they pull off the paint. A really soft brush is the best thing to use.

Q:Where did the art of painting on black velvet originate? A: Velvet painting got it’s start in the modern era from a guy named Edgar Leetag. We were in Portland, Oregon and knew about this guy Leetag. He is he father of modern velvet. He went down to Hawaii and Tahiti in the 1930s and painted the beautiful women of Polynesia on black velvet which he got from a funeral parlor because they lined the coffins with the black velvet. Leetag went down there with the five primary colors. 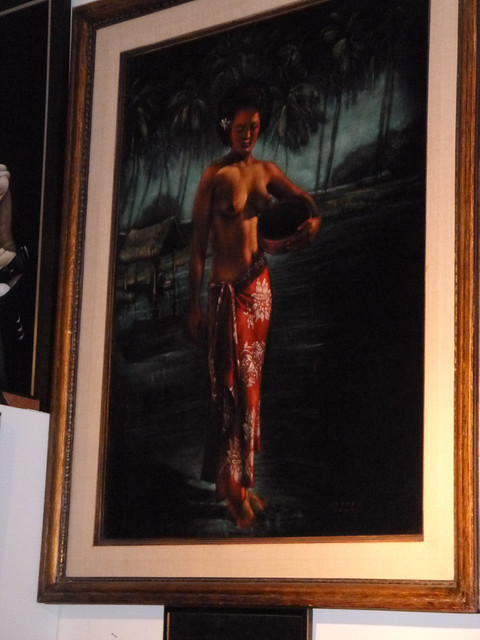 Q: Where did you get your impressive collection of Leetags? A:I got these paintings from a retired oral surgeon from Pasadena. We were on this show called “Offbeat America” and a woman called me and said, “My friend Doctor Kitch has two hundred and forty…”

Q:Wait. His name was really Kitch? A:Can you believe it? Charles Dickens where are you? But yeah, Doctor Lorne Kitch. He told me he made a lot of money after world war two doing oral surgery. He had his office in Pasadena where he has his exotic back room with “wahines” on black velvet. What a cool dentist huh? Doctor Kitch collected all of these.

Q:Why did he sell his collection to you? A:He knew a lot of the great artists of velvet. He was the main guy as far as I know for collecting paintings and keeping them in good shape. When I met him later in life Doctor Kitch was living in this Dodge conversion van in the middle of this eucalyptus grove full of hobos. It had marble statues around it that used to be around his Pasadena swimming pool. No running water. A chicken coop. Living off the eggs. We were sitting on tree stumps and he says to me, “I’ve gotta go to the bank.” He goes over to some tree, pulls money out of knot hole and said, “Okay now we can go into town and get some lunch.” I asked him how he ended up there. Doctor Kitch said, “It was the women. The women They took it all. Everything!” He then slumped down and slowly raised his head and said, “But it was worth it!” I have his collection. Told me to bring a pillow case full of hundred dollar bills.

Q:What is the most valuable painting in the collection? A:This Leetag here, It went to Paris last summer as part of this tiki show. Instead of going to the dump in Riverside or Goodwill it went to Paris. It’s like having a Picasso or something like that. It’s our Mona Lisa.

Q:From a pop culture standpoint is the crying Velvet Elvis the most popular velvet painting? A:That is pretty popular. Elvis is the king. But Jesus is on velvet more than anything else. Although I do have a hall of Elvis paintings.

Q:What is the oddest painting here? A: Maybe that one? (Indicates velvet Donald Trump.) 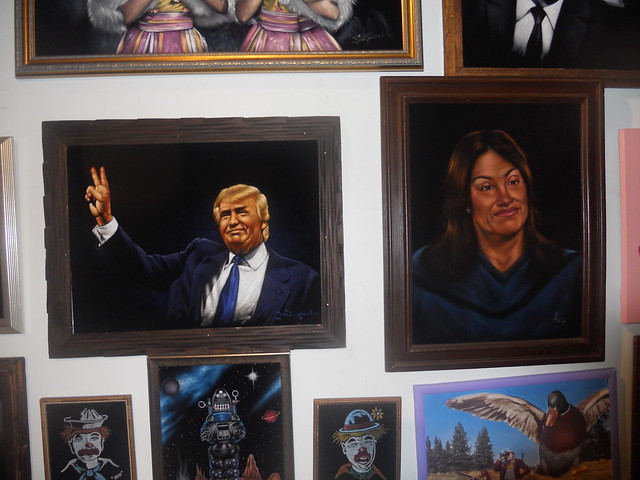 Q:That’s the scariest one. A: That is part of my Halloween show. I don’t know you would have to tell me what is the oddest one. Maybe Caitlan Jenner? Or this guy.

Q:That’s the “Heaven Gate” Hale Bop guy? A:Yeah the Hale Bop guy from the comet when they ate turkey pot pies and went up to meet the comet.

Q:I remember they were all wearing the same sneakers. A:They all had those faux Star Wars outfits. Another weird one is we did a show called “From Botox to Detox: The Surgical Evolution of Michael Jackson.” Jay Leno called up and said, “What do you have in your Velevteria?” And we told him about Micheal Jackson. Next thing you know we were on “The Tonight Show.” That is one of the most disturbing, the last face of Michael.

Q:Who does the paintings these days? A:There are all kinds of people. I’ve got all these guys in Tijuana that have been doing it for sixty years. Some are seventy now and have been painting since they were little children. These guys are at the top of their game. Its like having (Andre’s) Segovia play the guitar for you. They are that good. Then there are younger people I meet from time to time. But some of them are not motivated as much as they should be.

Q:How long does it take an artist to create a painting? A:These guys can knock one out in maybe a day. Two weeks turnaround if I order one. Donald Trump I got real quick because that is all anybody is talking about. It is an art form that is so underground. It’s not taught anymore. It never been taught in schools because the arts community all look down on it. An artist friend of ours got an art degree from Oregon State and her teachers there told her, “Do not paint on black velvet it will ruin your career. Ruin your life.” What an idiot.

Q:How many people do you see come in in a year’s time? A: I haven’t even thought about a years time but. On a good day I see about twenty or twenty-five people a day. I could use more. 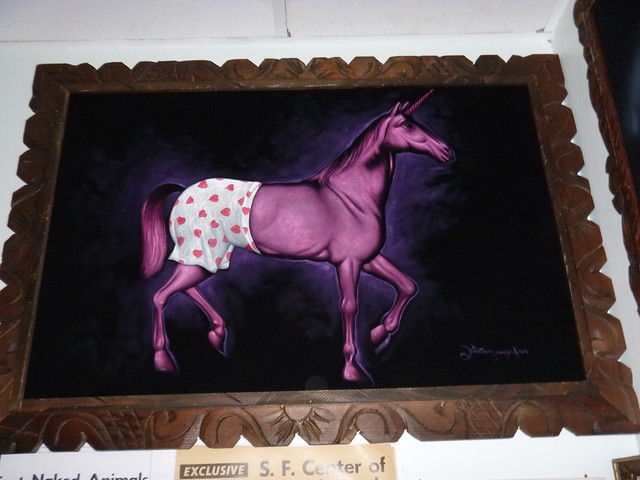 Q:Do you have a favorite? A:I got to go with the Wahines or the Leetag. Or the Unicorn Comb over is one of my favorites. This woman, her hair I enveloped as part of the unicorns mane and they look like they are conjoined. Couples come up and start looking at that. Holding hands. Then they start hugging each other. Then they go into our black light room and start making a baby.

Q: I dig the “Hall Of Elvis.”
A: Elvis is at the end of one hall and Liberace at the other. This painting of Elvis belonged to Liberace. It was from his home in the cloisters. Here we have Elvis, the greatest singer that ever lived and Liberace, the greatest piano player who ever lived, eyeballing each other as they prance through eternity.” 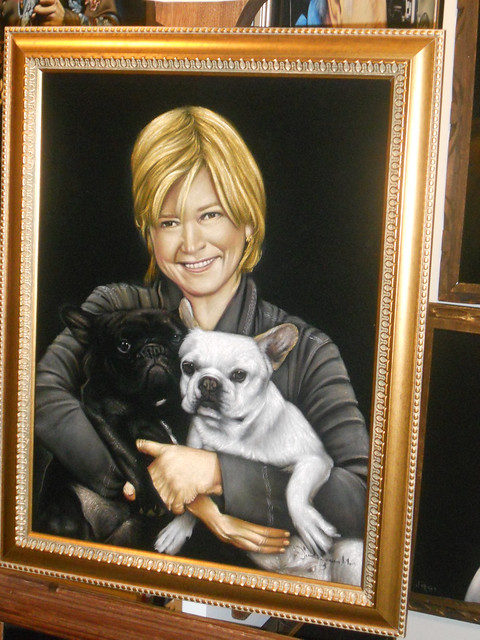 Q:Have you seen any celebrities come in?
A: I saw Jason Alexander here recently. I think it was him.

Q:How often do you change the collection?
A: All the time. I just changed it the other night for Halloween.

Q: Has anyone ever walked up to you and given you a painting?
A: When the museum was in Portland and there was this man and his girlfriend or wife there. They were homeless canners. You know picking up cans and recycling. One day he walks in with a Pabst Blue Ribon container and inside he had a velvet Elvis. He gave it to me. We paid him for it. 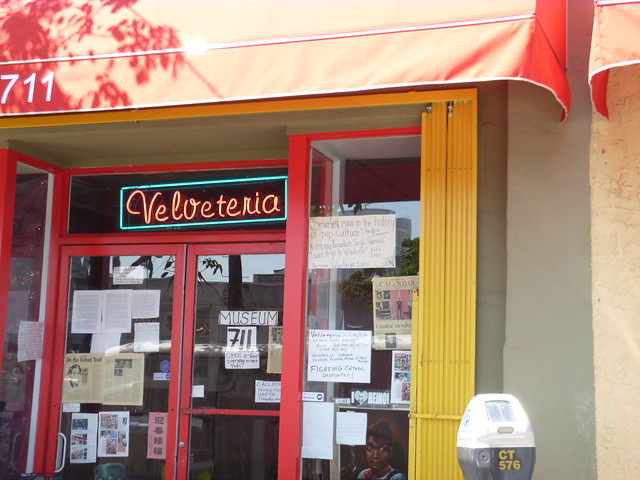