I realized I technically "posted" about this when we actually were in Florida, but I wanted to share some more snapshots of this roadside find!

Forgive me Retro Roadmap Readers for I have sinned. Yes - when we first landed in Florida I ate at a fast food restaurant, not knowing that Maryland Fried Chicken was just down the street. I mean c'mon we were in Florida- I wasn't expecting to see anything related to Maryland! So, waistlines be damned, I tried to make up for it - we stopped in anyways! How could we not, when we saw this distinctive sign amidst all the big and boring chain restaurants? 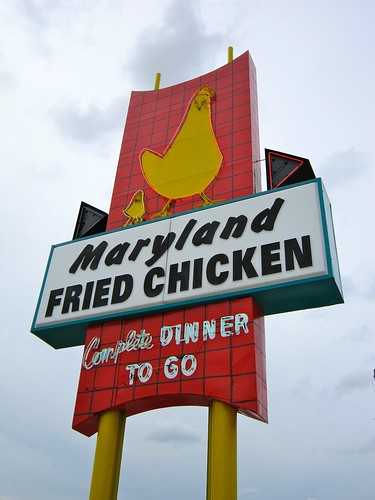 This Flickr search reveals that many of the signs had a round "sun" shaped object atop the sign that flickered at night. I am pleased to note that the sign at this location is only partially backlit plastic, with much of its original neon still in operation.

Even without the pulsating sun to catch your attention the gigantic neon sign is indeed a sight to behold, with the yellow momma chicken and diminutive chick contrasting with the red background, the neon triangles pointing to a low slung cinderblock restaurant with a few tables inside, a one-way in same way out parking area, and drive through. 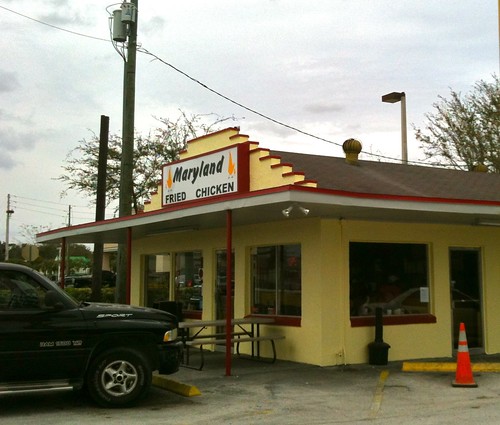 Maryland Fried Chicken was not started in Maryland, but actually right here in Florida in the early 1960s, with this location opening in 1966.  The Maryland name was the brainchild of one of the original founders, who realized that the Maryland name would be a familiar reminder of home for the many Baltimoreans who relocated to the Florida when Maryland-based aerospace giant Glenn L. Martin Co. (now Lockheed Martin Corp.) opened an Orlando plant. It's also a reference to Maryland style fried chicken, of which I was unaware until I read this article. 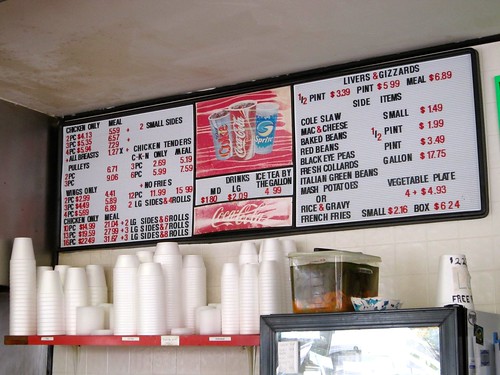 (With the limited tummyspace we knew we would have to go just for chicken, but I loved seeing the non-traditional (or at least from up at home) sides such as collards and black eyed peas - I'll pass on the livers and gizzards however.)

Though we didn't order one I just had to ask what a Pulley was, and was told that it was a special style of chicken breast, where they keep the wishbone or "pulley bone" as it's called down south, intact and there's meat on both sides of it. So now when you go there, you'll be in the know - that's what Retro Roadmap is here for :-)

While Retro Roadhusband did the ordering I enjoyed seeing the "momma and chick motif" recreated as a border along the ceiling, and it looked as if each one of 'em was cut by hand and made out of plywood.

To my surprise I learned that this was not the only Maryland Fried Chicken location and there are even  two locations near Retro Roadmap HQ that I'll have to investigate! I can't believe that they'd have as fine a signage as this location, but if they have the boxes that the chicken came in, that will be pretty cool, as I positively Fell In Love with this vintage graphic design - so much so that I told Retro Roadhusband we couldn't open the box til I snapped a photo of it. 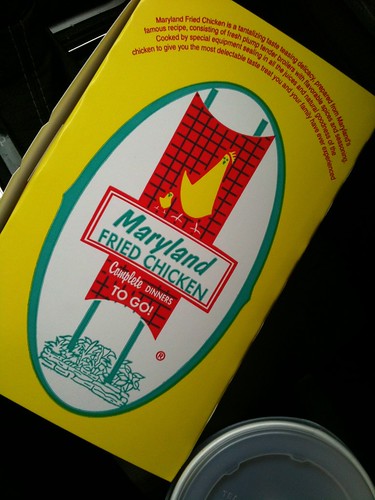 (No need to get your glasses out, I did the hard work for you - "Maryland Fried Chicken is a tantalizing delicacy, prepared from Maryland's famous recipe, consisting of fresh plump tender broilers with flavorable (???) spices and seasoning. Cooked by special equipment sealing in all the juices and natural goodness of the chicken to give you the most delectable taste treat you and your family have ever experienced")

I  Just Adore that color combo - the cheery yellow, red and almost aqua kinda green, the sharp edge vintage graphics, the slightly offset way the printing lined up. And check out the side! 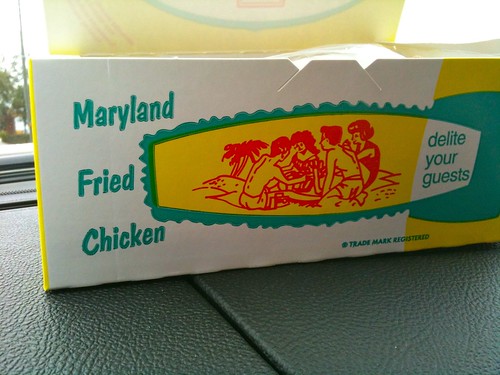 Who would not want to "delite" their guests, at home or at the beach, with this cheery graphic?

I bet at this point you're just like Retro Roadhusband was - "enough about the box...what about the CHICKEN?!" - and yes, there was chicken in the box, and yes it was delicious, even on a full stomach. Not greasy, just plenty of crunch on the outside and tasty on the inside just like I like it. (and you probably have learned reading on this site how much Mod Betty LOVES fried chicken :-)) 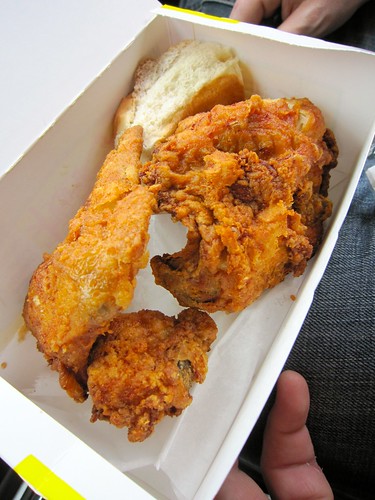 You know I must be totally infatuated to have done what I did shortly after we devoured our chicken - I walked back in the restaurant and waited in line to ask if I could have a clean empty box to take home. Bet they don't get that a lot - but I knew they had 'em ready for me  - and they'll have 'em ready for you too! 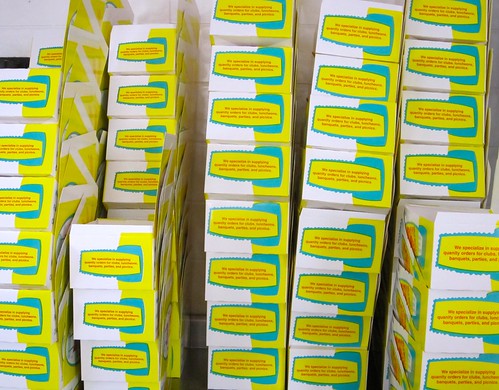