Thanks To Social Media We Visited The LaPlace Frostop in LaPlace, LA #thankyou @Twitter!

In the early days of RetroRoadmap's Twitter account I was looking for cool and vintage places that might be using Twitter to promote their business. There were hardly any but when I saw  the vintage root beer sign of the LaPlace Frostop's Twitter icon I followed them immediately and we've exchanged friendly messages ever since.

So, following the lure of their rotating neon root beer mug we headed south and were tickled to meet Frostop owners Jim and Terry Toler in person on our recent retro road trip.

Seriously, wouldn't you want to check out this sign for yourself? Here's the video I shot of it as soon as we got there- yes I was "wicked psyched"!

We made the right decision in "tweeting" ahead to see what time the Frostop closes, and barreled down the highway from Mississippi to get there before their 6pm closing time. When we rolled into their parking lot we were relieved to see that there were plenty of cars in the parking lot, and as soon as we went inside the restaurant we were given a friendly greeting from owner Jim and his daughter Terry, who is using her marketing degree and social media expertise to get the word out about the restaurant. As you can see from our experience, it totally worked! So glad to see modern advances can help drive business to a vintage destination. 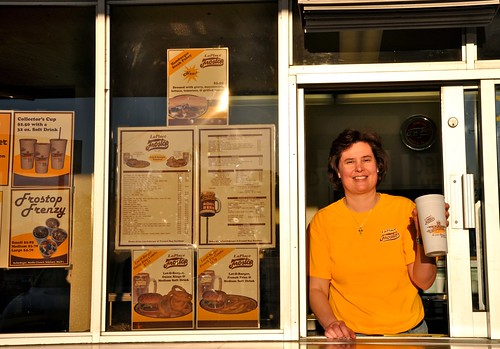 The friendliest of folks you'd ever want to meet, they chatted with us while gathering together a large order placed by a production company filming a TV episode of Memphis Beat across the street (click here to read the Frostop's blog entry about THEIR appearance on Memphis Beat last summer and a recent photo shoot at the restaurant for the show as well!).

As we alternately chatted and tried to decide what to eat, we learned from Jim that the Frostop had been around since 1958. Originally owned by his father-in-law, Jim bought it in 1973, and he and Terry currently run the restaurant. Though at one time there were numerous Frostop locations dotting the south and midwest, there are only a handful of them left today. And the pronunciation of their town is "la plass". Noted! 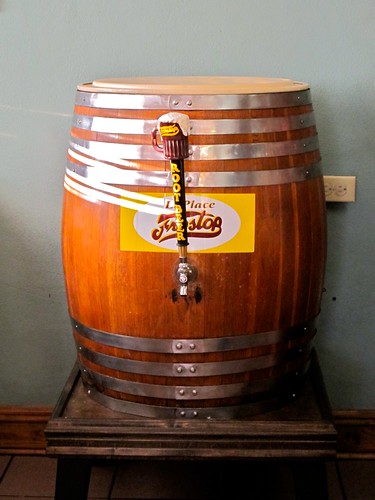 As you can see from the menus posted on the windows, the Frostop has a huge selection of items to order. Since we knew we were short on time we asked the Tolers what their best sellers were, and found out that they are famous for their root beer and their Lot-O-Burgers. Yes please! Since we were just half an hour north of Louisiana, I opted to get a shrimp po-boy, and RetroRoadhusband pretended to be healthy and also ordered a green salad with their Honey Gold dressing. Can you tell we were famished from our drive?!

While RetroRoadhusband sat at our table inside, I wandered around to take some photos in the glorious warm sunlight.

This cute little boy was getting a couple of bags of potato chips from the window service out front: 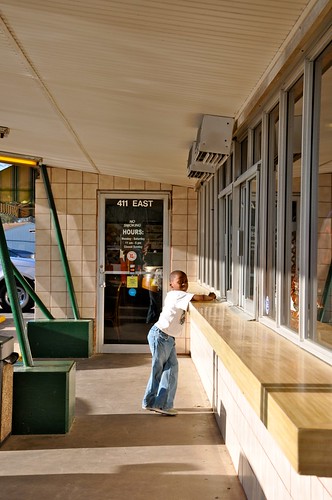 And as I turned the corner I saw my arch enemy lurking in the shadows: 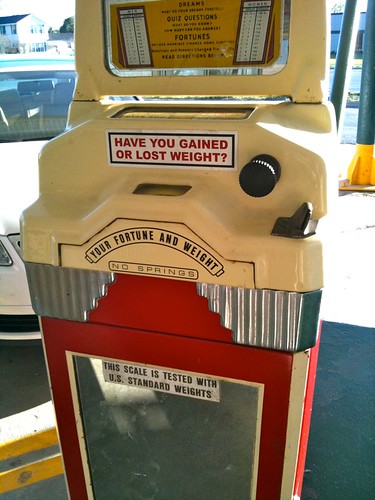 Damn you, vintage scale! Don't you know I'm on vacation and calories don't count (and I'm not counting calories?!)

I was pleased to hear our number called out, so I returned inside and in moments our table was laden with more food than we realized we ordered! Our eyes were definitely bigger than our stomachs in this case, but I dug into, and dug, my sandwich immediately. RetroRoadhusband gave his his Lot-O-Cheeseburger with Lettuce, Tomato, Mustard,Mayo,Pickle,Onion the thumbs up and ate most of his salad with the dressing.

And this is a cool detail that I was surprised but pleased to see - since we were eating in the dining room we had real plates and silverware, not more trash producing disposables. Very retro and very green at the same time. 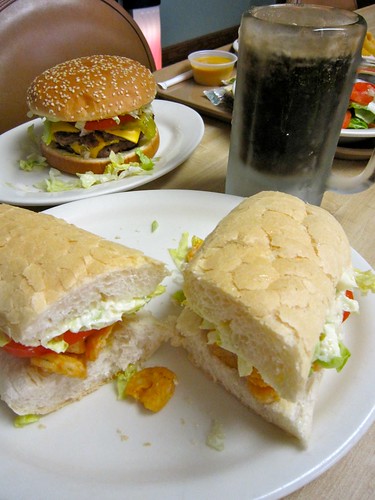 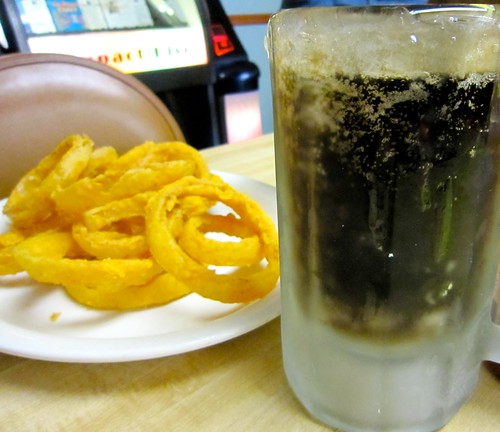 I am telling you, I don't know what it is, but these were the most tasty onion rings I have had in ages. Sweet onions, light and crispy coating, not too greasy, but greasy enough to be flavorful, I was stuffed when we left because I refused to leave any of those onion wonders on the plate. It's probably good for my waistline that I didn't buy a bag of their onion ring breading, but it's good to know I can order it, if the memory of those onion rings comes back to haunt me. But alas it was time for us to get on the road again, so we left with some souvenirs and not an inch in our tummies for their ice cream treats. 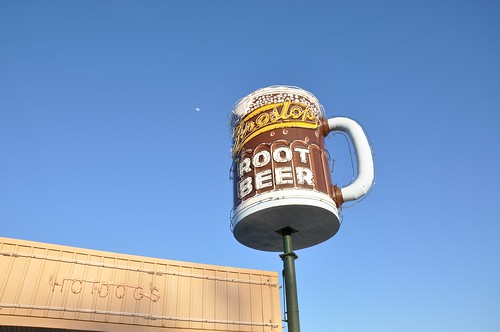 Though it was well past their posted closing time of 6pm there was a steady stream of customers coming in the door, and each one was greeted with a friendly welcome, even though technically the door could have been locked. Business here in LaPlace had been affected by the storms and hurricanes over the past years, so it was good to see folks still swarming in to support this local landmark. This was definitely a highlight of our trip as well.

So if you're even vaguely in the area - follow the rotating mug and visit the friendly folks at the LaPlace Frostop. I'm sure they'd be pleased to know that RetroRoadmap sent you! It was

And talk about Social Media - way to go Terry!