I'm always on the hunt for fun, free retro-rific activities and trips. And with Halloween quickly upon us I found myself searching for something a little spooky. But rather than check out a haunted hayride or house of horror I decided to take a more star studded route. Where else in Tinseltown are you guaranteed to be surrounded by the rich and famous at any time than at Hollywood's famous cemeteries. At these great graveyards you are never more than six feet from celebrities. All you need is a shovel.

I'm kidding about the shovel part.

For this Retro Road Report, I decided it was time to visit the final resting places of some of the biggest names in film, TV, music and more. Where else but in Hollywood can you spend the day with everyone from Marilyn Monroe to Don Knotts to Dean Martin and Paul Walker? Nowhere.

The technical term is “Graving” aka visiting the graves of deceased stars. Lots of people from European tourists to everyday “Joes” like me do it. And not just at Halloween. Many take pictures. Some even do etchings of the headstones. And a few even picnic at the graves of their faves. There are several star-studded cemeteries to choose from in Los Angeles area. I picked my top two. Both selected for their easy access and sheer volume of well known residents.

Forest Lawn: Hollywood Hills is a sprawling green oasis located at the edge of Hollywood and at the start of the San Fernando Valley. Remove the graves and the area would make a fantastic West Coast version of New York City's Central Park. But you're not here for the nature. Forest Lawn Hollywood Hills is packed to the brim with old school Hollywood's brightest. 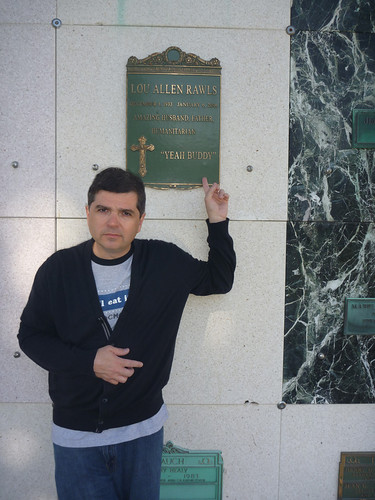 Start at the Mausoleum called “Court Of Remembrance” and Betty Davis awaits you at the entrance. Follow the outer wall down to your right and you will also find the crypt of Teen Idol Andy Gibb. Further around the outside, Soul Men Lou Rawls and Melvin Franklin of The Temptations lie in eternal rest. As does circus giant Clyde Beatty. If you turn back and travel inside the main entrance you'll find the unlikely pair of Freddie Prinze and George Raft entombed in the wall side by side. Ahead a giant sarcophagus holding the remains of Vegas entertainer extraordinaire Liberace awaits. No wishing “My brother George Was Here” because he's also entombed there with Lee and their mom. 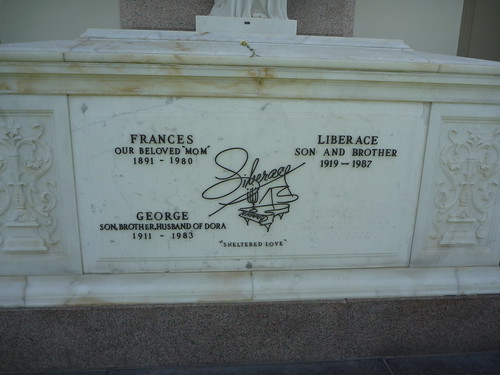 Deeper inside funnyman Morey Amsterdam (“Dick Van Dyke Show”) is just a few feet from Weezy aka Isabel Sanford from “The Jeffersons.” You can also visit with “Grease”mentioned actress Sandra Dee. “Look at me I'm... Dead, ” heavy metal master Ronnie James Dio and “Woody Woodpecker” cartoonist Walter Lanz. The latest resident in the area is gentle giant actor Michael Clarke Duncan. His crypt is still unmarked. Back outside cross the street into the grassy area and spend a few minutes with husband and wife comedy legends Ernie Kovacs and Edie Adams. 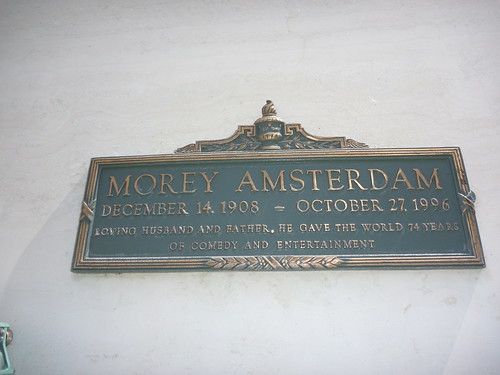 Get back in the car and head up the hill toward the giant statue of George Washington at the “Courts Of Liberty” section. You'll find everyone from fitness guru Jack Lalane to “Happy Days” Tom Bosley and comedy giant Buster Keaton buried in the lawn. Marty Feldman is there too. Climb up the main steps and 2 other comedy giants await on the right. Stan Laurel and John Ritter of “Threes Company” fame. Both graves easy to find. Steve Allen also rests nearby but his final resting place remains sans headstone. Travel left past the fake grave of Penn & Teller (both still alive at the time I wrote this) to visit my favorite star—Telly Savalas, the chrome domed star of “Kojak.” I always leave him a lollipop. “Who Loves Ya Baby?” I do Telly. Across from him rest “Fast & Furious” star Paul Walker who died tragically in 2013. A line of toy cars are always at his grave. 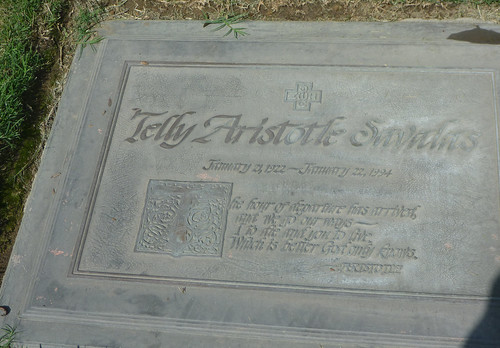 Get back in the car and drive further up the hill and right toward the giant statue of Abe Lincoln at the “Lincoln Terrace.” There you can visit with no nonsense thespian Robert Conrad, David “Kung Fu” Carradine, and the voice of “Hong Kong Phooey” himself Scatman Crothers. If you have more time Ricky Nelson, Brittany Murphy, Michael Hutchence (of INXS,) Gene Autry and Jack Webb are also buried on the grounds. 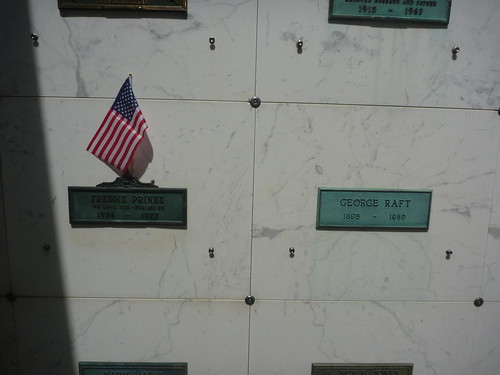 The staff at Forest Lawn Hollywood Hills are mostly helpful and willing to point out the stars you are looking to visit. Unlike their sister cemetery Forrest Lawn Glendale which treats their dead like you were a grave robber. The most famous resident there, Micheal Jackson's remains are protected by a guard. I suggest you print a map (available online) before you hit Hollywood Hills since the grounds are so vast and sprawling.

Remember a few rules whenever you do visit these sites. Be respectful, don't step on headstones and speak in hushed tones. People may be grieving their non-famous recently dead relatives nearby.

Also don't go alone. And remember underneath everything (including the dirt) the celebrities you are visiting are just like you and I. Except they were once rich and famous. And now they are dead. Very, very dead.